With over 11 years experience in the IT industry, I’ve recently moved over from Ireland to pursue a career in graphic design.

This site is a showcase of some of my work. A PDF Portfolio is also available upon request. 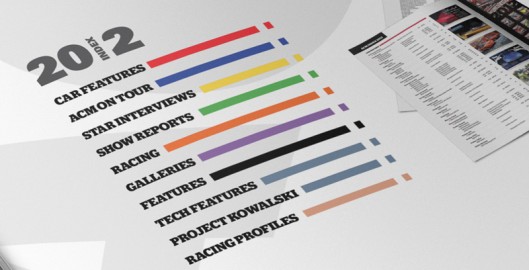 I recently pitched the idea of an index for American Car Magazine and subsequently went on to compile and design it for the January 2013 issue. Here’s why I did it and why I think more magazines should do it too.

Over the years I’ve accumulated quite a large stack of magazines. Everything from Computer Arts, Empire, Focus, Playstation Magazine, Lonely Planet Traveller, Digital Camera, PC Format, Web Designer… well the list goes on… Suffice it to say I’ve contributed greatly to the survival of Easons and WH Smiths, not to mention the publishers.

Hidden deep within this mag-mountain is a treasure trove of countless features, spectacular photography, inspiring design and essential guides. The only problem is that they are too hidden. There are times when I want to re-read an article or two from old issues and can’t for the life of me remember which issue it was in, or even what year for that matter. If it was a cover story the search wouldn’t take too long, but if it wasn’t splashed on the mag’s cover like a slap in the face, I’m forced to flick through thousands of pages to find the one I want. Don’t even get me started on paper cuts!

Surely there must be an easier way? Well there is. Sitting on the desk beside me is the beautifully designed Assassin’s Creed Encyclopedia published by Ubisoft. Coming in at 384 pages it’s no Encyclopedia Britannica but it is a hefty volume nonetheless with a vast amount of entries and information. Thankfully publications of this sort never expect the reader to trawl through the pages to find specific points of interest. Instead they provide an invaluable tool that’s been around for centuries – an Index.

But why is the faithful index consigned to an existence primarily within hardbacks? Why doesn’t it appear more between the glossy pages of newstand magazines? Perhaps it’s dismissed as too much effort to take time out of the schedule to compile and design. Or maybe it’s a matter of publishers wanting to constantly appear current and up to date without drawing attention to older features that may appear to age the publication. Either way, I feel they are missing a trick. 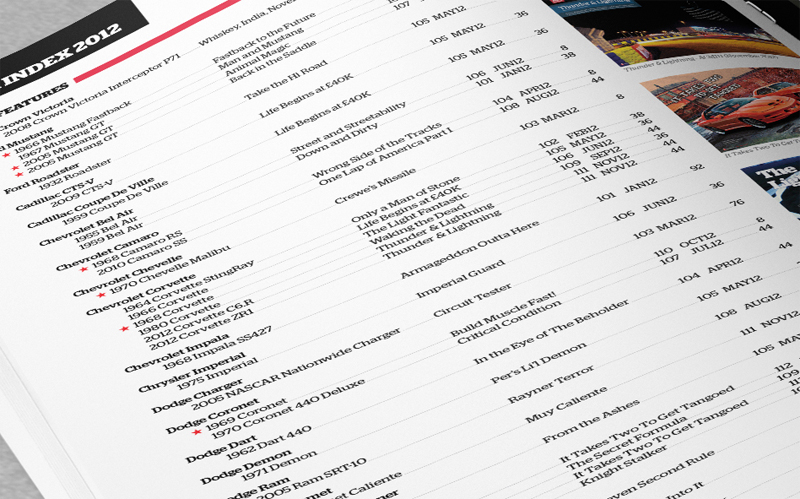 An index within a magazine would not only help the reader find past articles and features should they wish to re-read them, it would also highlight these same articles to new readers who may not have the specific issue a particular feature was in. Publishers are always pushing adverts for back issue orders, a revenue stream more lucrative now than ever before in the age of tablets and digital downloads. But it’s not always clear exactly what’s in those back issues. The adverts usually display a shot of the cover image with little to no details of the content within. Unless I know there is something in there that I really want I probably won’t fork out the money or go to the effort of ordering an issue I missed the first time around.

With an index however, all the information is there on display. If there’s a particular feature or subject I’m interested in I can look it up and be pointed toward all the issues that contain exactly what I’m looking for. This has massive potential for boosting back issue sales – especially on tablets where I can download and read what I want in a matter of minutes. If the publishing of an index coincided with a back issue sale (such as the industry’s frequent 69p tablet sales) purchase volumes could increase even further and help to convert what would otherwise be dead money.

The plan is to not only have the index published in January’s issue but to also offer it as a free PDF download from the magazines website.

For the past few months I’ve been working as a designer at American Car Magazine. Last month I suggested doing an index of 2012 issues in the January 2013 issue. I wanted to make it easy for our readers to find the articles featuring particular cars, tech guides, racing results, show guides etc. I also wanted to draw attention to our back issues to boost sales over the christmas and new year holidays. My proposal was accepted and I swiftly went about going through the 2012 issues and compiling a list of the most relevant features and articles. Once I had the data together the next step was to design the index into a legible format. Included in the design are images of some of the biggest features to help highlight them. The plan is to not only have the index published in January’s issue but to also offer it as a free PDF download from the magazine’s website. This will increase the audience and direct more attention to back issues. It also means the reader will always have a copy of the index in hand.

So long as it has the main sections and details the primary points of interest to help guide the reader through their collection.

But isn’t indexing everything from every issue a little excessive? Obviously magazines and hardbacks are different mediums with different needs. A magazine index does not have to be an index in the strictest sense. It doesn’t have to list every single piece of information from every issue. It should be tailored to meet the requirements for a particular publication. So long as it has the main sections and details the primary points of interest to help guide the reader through their collection.

The January issue of American Car Magazine goes on sale next week and I can’t wait to see what the readers think of it and more interestingly, if it helps to boost sales over the next few weeks. I’ll be sure to update this post in the New Year. If it’s received well hopefully it will become a regular-ish edition to the magazine. In the meantime I look forward to a time when I can see what issues of Empire feature my favourite films. Which Lonely Planet has the destinations I’m planning to visit. And which Computer Arts features my favourite designers and tutorials. All without having to endure multiple paper cuts.

I’ve added the American Car Index 2012 to my portfolio on this site. You can see it here. The print edition will be on sale on Thursday 20th December.